Distillation is a process that heats a substance into a vapor and cools it back to a liquid. This process can be used to separate components with different boiling points. There are different variations of this process, which are all dependent on the components, and the temperature, and pressure of the system.

Simple distillation is appropriate for the separation of materials that have significantly different boiling points. When heated the liquid that is more volatile will vaporize and travel through the system, recondensing into a liquid when it passes through a chilled condenser. This results in the volatile substance becoming separated from the initial product.

How is distillation used for cannabis oil? 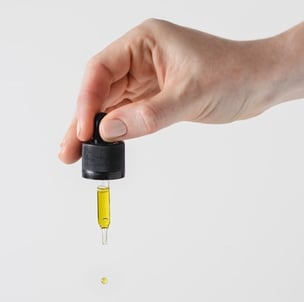 The cannabis and hemp industry uses distillation to further purify crude oil. The extraction process generally uses solvents such as ethanol, or CO2 to remove the crude oil from the plant biomass. The distillation equipment then takes the crude oil and produces a pure product, usually of either THC or CBD distillate by removing other volatiles and contaminants.

Distillation can take multiple passes to remove all unwanted compounds before producing the intended final product. The first pass usually removes low boiling point volatiles. A second pass focuses on distilling the desired cannabinoids, leaving behind other contaminants such as waxes, sugars and any leftover plant material. This results in a pure product of the desired cannabinoids or terpenes depending on a company’s intention.

Multiple passes can be necessary especially if a company does not use a winterization process on their products. Winterization removes any contaminants like fats, and waxes from the initial oil extraction. Without this process those contaminants are left in the solution and will need to be removed during distillation to produce a pure final product. Setting up multiple distillation equipment that are connected directly to each other reduces the need for multiple passes through a singular system.

The most common form of distillation system is short path distillation. It is beneficial because the vapor travels a shorter distance before it is condensed, allowing the equipment to take up less space. The crude oil is deposited at the bottom of a flask where it is then heated to initiate the distillation process. This system generally gets used on a smaller scale, as it typically needs more manual operation or oversight.

A similar equipment is the wiped film distillation system. The only difference to the above system is the introduction of a wiper blade that spreads a layer of the initial feed product onto the chamber walls. This thin layer reduces the amount of time heat is applied to the product. Prolonged exposure to heat can degrade a cannabis product and this equipment reduces that risk. The wipers also provide an even spread that supports more consistent evaporation and condensation rates.

The popularity of wiped film short path distillation may also be attributed to its continuous feed abilities that increase output and efficiency. Continuous feed supports operation by helping to produce large quantities and maintaining consistency. This process is more automated due to continuous feed and the wipers and is therefore more suitable for large scale operations.

Temperatures and pressures used in a system can usually be altered to address a business's specific goals. Changing the pressure can affect the temperatures at which certain compounds boil at, making it easier to remove them from the product. If boiling temperatures are lowered, this also decreases the risk of overheating and degrading the product.

Distillation is relatively simple once the extraction process has taken place. After all the undesirable materials are removed during the extraction process, the purest form of crude oil is left. As this is not a one size fits all method, the industry today requires you to focus on both scaling up for the mass market, and scaling down for smaller, more local needs.

As short path distillation requires less pressure to be exerted on the distillate, it is more common and favorable when working with volatile compounds and when purifying small amounts of substance. With heat, pressure, and humidity - it forces the remaining impurities and traces of solvent extraction residue out.

The short path causes the cannabis extract to break down into its constituent compounds. THC and CBD are separated out at different temperatures as they have slight differences in boiling points. It is more effective and has better results when it is done on a large scale using industrial level equipment. Once it is distilled, the cannabis concentrate has a higher CBD or THC content compared to the crude oil. Distillates of different cannabinoids can then be blended to customize a product.

If further purification is required, the distillate can be passed through an isolate production system to obtain up to 99.9% pure cannabinoids.

Want to learn more about the process of distillation in the cannabis and hemp extraction industry? Maratek has engineered short path distillation systems that will improve the purity of your product. Contact us today for more information.