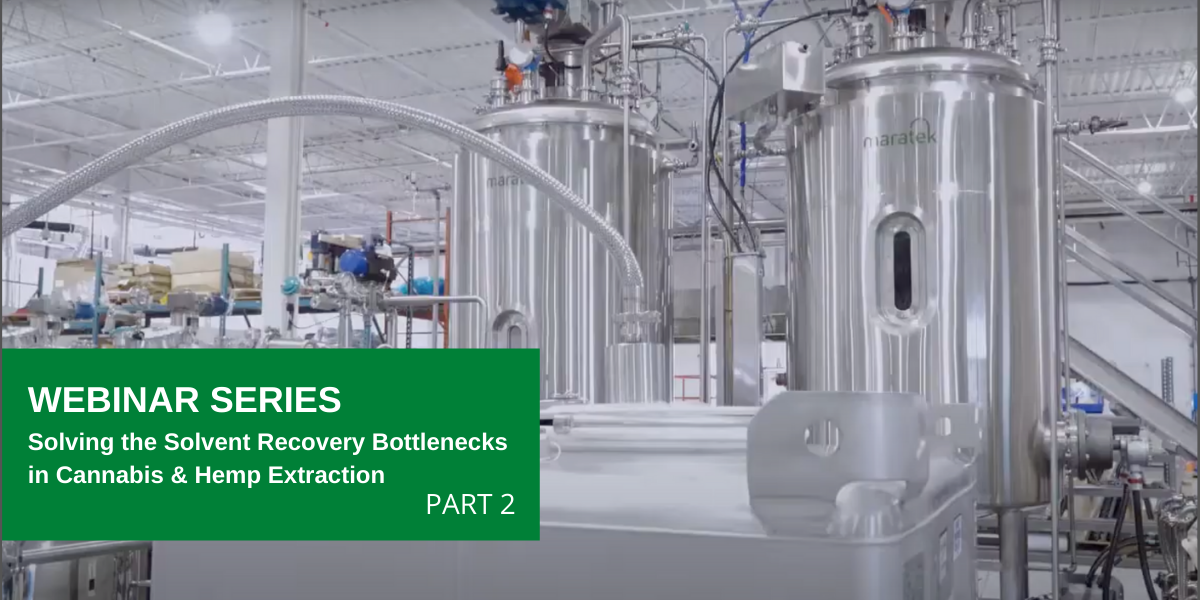 In the first blog on our second webinar, we talked about some of the most common bottlenecks involved in the cannabis and hemp extraction process once you scale up your project from lab to industrial.

In our second part of the blog, here, we are going to dive into the common issue of water buildup in your extraction process - and what solutions you can use to ensure you separate that water as economically and efficiently as possible.

If you want to watch the webinar in full, you can find the full video in the embedded YouTube link below, or you can continue reading this blog for a summary of the second half of the webinar.

How water gets into your cannabis and hemp extraction process

Ethanol is one of the most useful and widely-used solvents because it is non-toxic and it's both a polar and nonpolar solvent. This means that on one end of the ethanol molecule you have a hydroxyl group, which is strongly polar, and this lets ethanol dissolve into polar substances or water-soluble substances.

The other end of the molecule is an ethyl group, it's a hydrocarbon and it's nonpolar. This lets ethanol dissolve nonpolar substances or oil-based substances. So it's really a universal solvent.

Its properties though mean it has one problem, which is that the polar portion can dissolve into water and then form a homogenous solution that can't really easily be mechanically separated.

You can't filter them out, you can't decant them, they don't settle into layers, they form a mixture that's pretty hard to separate. This means it tends to just accumulate in your process. All the water that's coming in that gets dissolved into your solvent tends to just continue building up and dropping the purity of your ethanol.

You can kind of control how much water is getting in. Depending on the scale of your process, hundreds or even thousands of pounds of water could be the mass flow into your process and if a hundred percent of that's getting into a solvent loop, that's something you can't ignore - it will become a big problem pretty fast.

Is cryo-ethanol or warm ethanol extraction the solution?

The best-case scenario for this situation would be a cryo-ethanol extraction. That's if your plant material is frozen and the ethanol is chilled below minus 40 and maintained at that temperature throughout the extraction.

What happens is the cells at the surface of the plant freeze and then they aren't really disturbed or penetrated by the ethanol. If ethanol gets inside the cell it's pulling up chlorophyll starches, sugars, fats and lipids with the polar and nonpolar things - all that's inside the cell - and really the cannabinoids that we are after are in the trichome structures on the surface, outside the cell.

In cryo-ethanol extraction, with the cells frozen, you can just dissolve what's in the trichomes and get a very very clean oil, and also very very minimal water will end up in your solvent.

Warm ethanol is an easier process to do - easier and cheaper to operate - but the ethanol will disturb the cell and you'll be pulling out a lot of that water, even in the deferred extraction step, which is basically unavoidable.

They're solvable but it's a problem downstream and the contaminants like starches and chlorophyll etc must be dealt with.

There's an issue with both types of extraction. Your plant material is going to be soaked in ethanol after you extract from it. This soaked ethanol is hazardous and the vapor that is coming off of it is flammable. This is a big waste stream for your process.

So, one way to deal with that, is to screw press the wet plant material and squeeze out that ethanol. However, that can mechanically break the cells down and you're squeezing out water now.

If you then take that cake which is not completely dry and put it in a low temperature kiln where you're boiling and then recondensing the vapor coming out to create a completely dry waste product of your biomass - well if you're drying it out you're also drying out all the water from it. That 10 to 20 percent water the plant is coming in with has to all end up and with your solvent and, like I said, once they mix together they're not very easy to separate. And that happens with cryo and warm ethanol.

If you want to completely close your loop it's very difficult to avoid that water building up.

So, what can we do about it?

There's basically two mechanisms we can take advantage of here to separate the ethanol. First we'll start with absorption or differential absorption. This would be a material that would tend to absorb water but not ethanol from a mixture and this would be like molecular sieves - you think of it typically like a pellet.

What you would do is you would flow your solvent into a tank or some kind of pebble bed reactor, with the molecular sieve pellets, and leave it there for some amount of time and it would absorb the water out of the mixture.

The cheapest to set up and easiest solution would be disposable molecular sieves. You'd fill it with pellets, you'd allow them to absorb as much water as they can so they become saturated and then the pellets would need to be disposed of.

Here at Maratek we think of this as the laziest solution - it's cheap to set up but expensive to operate. It would be quite a significant cost at scale to continuously dispose of these pellets and, in fact, even at small to medium scale, disposable molecular sieve pellets are very uneconomical.

There's also pellets or molecular sieves that can be regenerated by either heating them up or pulling vacuum on them with pressure swings. You can reuse them, although they will eventually wear out. The problem with this is now already, you need to double your system.

You need one bank of molecular sieves that's processing and you rotate it with another one that's regenerating and you switch them back and forth. So already, you've bought the system twice and now they need to be insulated and heated, which is an energy cost, or now you need vacuum pumps and other tools. That partially offsets the cost of the disposable pellets, but not completely.

This could still be uneconomical however, the benefit of this is that molecular sieves can purify your ethanol to 100% purity. This is what laboratories do if they need to produce 99.99% pure ethanol.

Then, we get to the other mechanism which is taking advantage of differential vaporizations. This would be the distillation method.

This is basically taking advantage of the fact that when you boil a liquid mixture of ethanol water, the vapors that come off will be enriched in ethanol up to the azeotrope point. If you capture the vapor, say you're boiling a mixture 40%, the vapor is 70% ethanol, if you take that vapor and recondense it, now you've upgraded it - you've created a more pure ethanol mixture.

With fractional distillation, the column basically does this step over and over again. It's the most efficient way of separating a large stream of water and ethanol up to very pure ethanol - as economically and efficiently as possible.

Now, there's a problem called the azeotrope. In the water-ethanol mixture, if it's 95% ethanol, water and ethanol boil at one-to-one, the exact same rate - so it's impossible to use distillation to go above 95%.

This can remove a small amount of water so, depending on how much water you are picking up in your extraction, it's possible that the OERS four-in-one can maintain your ethanol between 80 and 90% without using a sieve, without using a column and without buying fresh ethanol and cutting that into your solvent inventory, to keep it at a higher percent.

Do you have any further questions in regards to dealing with water buildup bottlenecks in your cannabis and hemp extraction process? Contact Maratek today. Our team of experts would love to answer any questions that you may have.

In the meantime, please stay tuned for our third webinar, where we will be discussing the myths related to safety and room specifications - so C1D1, C1D2.