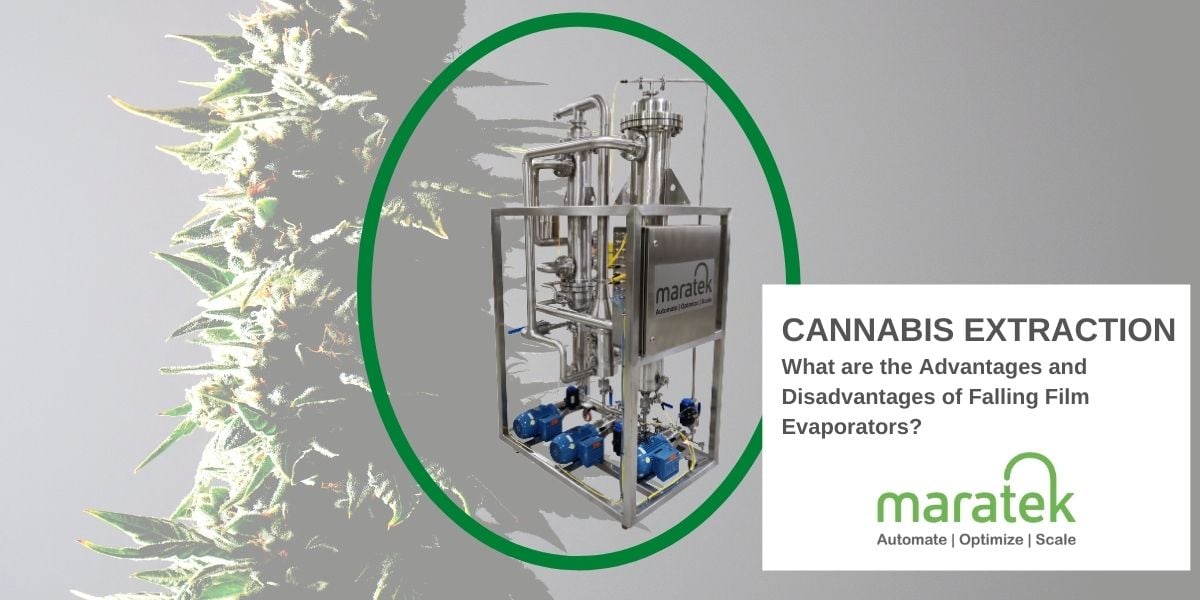 A falling film evaporator is a machine used to separate two or more substances with different boiling point temperatures. It does this by taking advantage of changes in state at different temperatures and uses heaters and condensers to complete this task.

These machines have many applications across a variety of industries, including the cannabis and hemp sector. Falling film evaporators are needed to perform bulk separation of solvent from oil extract after the solvent has done its job in the extraction step.

In this blog, we’re going to take a look at what exactly falling film evaporators are used for, how they work, as well as the advantages and disadvantages of using this type of equipment.

What is a falling film evaporator used for?

A falling film evaporator is used to recover solvent and produce high-quality cannabis extract oil. The machine aims to act as a solvent recovery unit to recycle high-quality solvent.

Solvent recovery in the cannabis and hemp industry is a key step in ensuring a high-quality product and lower solvent and energy costs. At the end of the falling film process, what should remain is a THC or CBD extract oil ready for the decarboxylation process with very low solvent residual, and high purity recovered solvent. 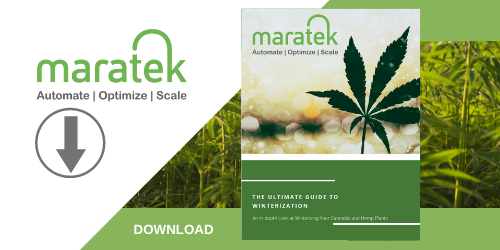 How does a falling film evaporator work?

Falling film evaporators use a heat source such as electric heaters, or in our case heat pumps, to heat the solution until the lower boiling point liquid becomes gaseous and then uses a condenser to turn this separated gas back into a liquid which becomes a recovered solvent.

Falling film evaporators consist of vertical tube and shell exchangers, which is where the process takes place.

In the cannabis and hemp industry, crude oil and ethanol have two different boiling temperatures. The boiling point for ethanol at the vacuum pressure we use is around 50°C, whereas the components of crude oil are much higher meaning that the oil can easily be separated from the solvent at high temperatures.

In the shell and tube heat exchanger design, a heat transfer liquid is heated and then used to heat the inside of the tube which contains the crude oil and solvent solution. Using this method allows for even heating of the solution so that most of the ethanol can be evaporated at a similar rate.

The vacuum draws the extract oil into a collection tube and the vaporized solvent into a condenser where it can be converted back into its liquid form and reused.

A falling film evaporator comes after your extraction and winterization stages but before your decarboxylation and distillation stages. It takes an oil that has already had all the fats, waxes, and lipids removed and then further isolates the THC or CBD oil. After the extract has had the solvent recovered from it, it can be decarboxylated.

Decarboxylation occurs using heat to convert the THC-A and CBD-A molecules found naturally in the cannabis and hemp plant to the bioactive forms ready for consumption.

At this point, the oil is ready for sale or further processing to completely isolate the THC or CBD molecules. Decarboxylated oil is ready for use as it can now interact with our endocannabinoid system and provide medicinal and recreational benefits.

Benefits of this evaporation method include limited heat exposure to the extract and the possibility of continuous operation.

Falling film evaporators can also handle a large volume of throughput and can be automated for ease of use. Batch evaporation takes much longer and exposes the extract oil to prolonged elevated temperatures, which some producers consider a risk factor in degrading their valuable oil.

Falling film evaporators rely on precisely feeding in the solvent and oil extract solution at the rate the solvent evaporates, if this is not done perfectly, significant residual solvent will be left in the oil. With sensors and computer control this disadvantage can be overcome, however, many lower cost falling film systems require manual control of the feed pump. Without automation, efficient falling film operation becomes a time-consuming job for a skilled operator.

Falling film units also still use solvents. Solvent extraction is slowly being replaced with solventless-extraction in the form of ice water extraction and air extraction which removes the hassle of dealing with ethanol in the first place.

How to separate the “good” from the “great” falling film evaporators

While the process remains similar across all types of falling film units, there are some that set themselves apart. Falling film evaporators can run at a variety of temperatures. For cannabis and hemp, high temperatures create a risk of overheating the oil or boiling off the terpenes. The closer to the boiling point of ethanol the machine runs, the better.

Some systems also require both a falling film and rotary evaporator which increase the amount of time the oil is heated for, leading to more risk of quality loss.

Falling film evaporators are also becoming much more efficient. The heat removed for the solvent in the condenser can be recycled to heat the heat transfer liquid and create a closed loop system. Recycling energy in this way is a clever solution to keep the costs of operating a falling film unit down.

Finally, a great falling film evaporator recovers 99 percent of the solvent used and creates a much purer final cannabis extract. Some units only recover 70-80 percent of the ethanol from the solution and require the rest to be removed in a rotary evaporator or in the distillation process to produce a pure THC or CBD extract.

With Maratek's experience in the cannabis and hemp industry, we have developed the most energy-efficient falling film evaporator system on the market.

Maratek's patent-pending Helios incorporates new technology into the established falling film process that allows energy savings of up to 65 percent compared to a conventional system. We have created a one-of-a-kind, closed-loop system with a heat pump designed for maximum efficiency and cost savings. This units checks all the boxes for a “great” falling film evaporator!