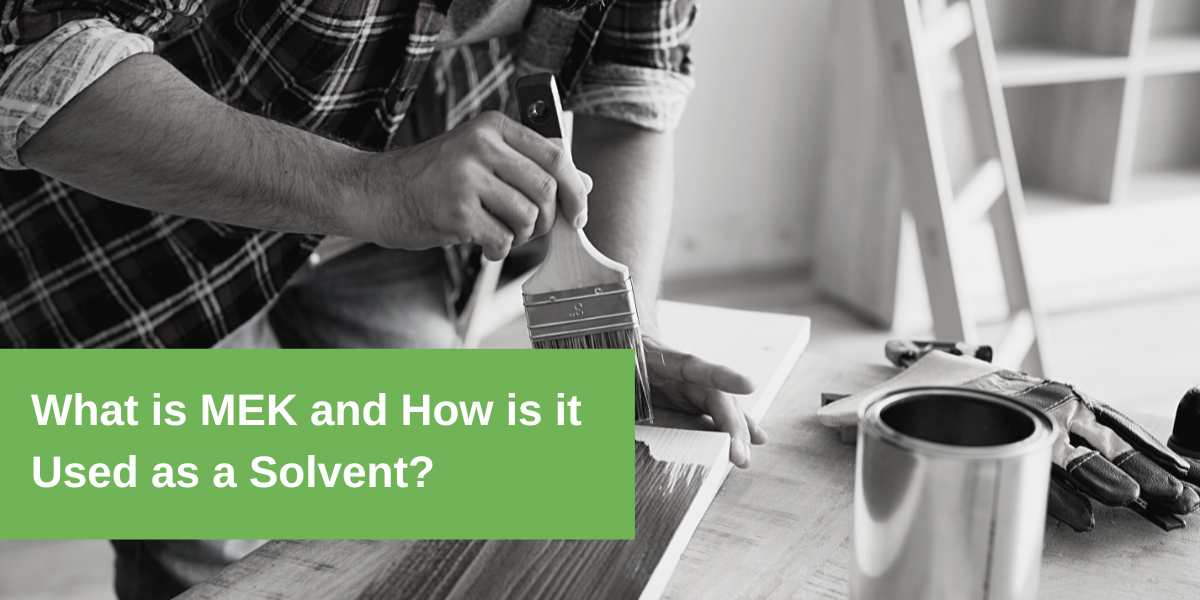 MEK, short for the scientific term Methyl Ethyl Ketone or butanone in some cases, is an organic compound with the chemical formula of C4H8O. This translates to four carbon, eight hydrogen, and one oxygen making up the chemical compound.

MEK is a colorless, versatile, mint-like odor and volatile compound that can be found across a variety of industries worldwide.

Where is MEK found?

MEK can be found in two ways.

In nature, MEK can be found in products such as live animals and grown fruits including chicken, apple juice, beans, and honey. MEK in nature can also be found in specific trees that emit MEK such as junipers, cedars, cypress trees, and ferns. Finally, MEK is found in seaweed and bacteria as they emit gases and other natural compounds into the environment.

MEK is not only produced by nature but through man made creations as well. Studies have shown that approximately 86% of the MEK produced is from dehydrogenation of secondary butyl alcohol and 14% by-product of butane oxidation.

MEK can be found in the air released from the exhaust of cars and trucks worldwide (by-product of butane oxidation). MEK is also found in the process of dehydrogenation of secondary butyl alcohol which is the chemical reaction that involves the removal of hydrogen from an organic molecule. This is normally done through man made creations and experiments.

How is MEK used?

MEK is one of the more versatile solvents used in industries as it can be found in a variety of products produced worldwide. MEK is a common ingredient in paint and paint products like paint remover, glue, lacquer, and more. MEK can also be found in the fiberglass and plastic manufacturing industry as it is used as a catalyst for both vinyl and polyester resins.

MEK is not only limited to making physical solid objects, but liquid substances as well - such as other chemical compounds. This can include cleaning products for different types of surfaces as they include little amounts of MEK within them.

MEK is not just limited to these industries, and is one of the most popular solvents used in our world today.

Why is MEK effective as a solvent?

The most commonly asked question about MEK is “why use MEK?”. There are several solvents worldwide that can be a substitute for MEK so why should it be used over others?

The answer is simple, its strength as a solvent.

Each solvent has different properties that make it unique and more effective than others in different scenarios. MEK’s properties allows it to have a higher boiling temperature and a slower evaporation rate making it have a longer lasting effect than many other solvents. This property allows MEK to be effective for certain industries like the cleaning industry, as it cleans stains effectively while lasting a long time.

This property also helps physical objects become stronger and be more coherent when sticking together. This is why MEK is used in the manufacturing of fiberglass and plastics.

The economic status of MEK

The demand and supply of MEK continues to increase each year as the consumption of goods and manufacturing continues to grow. This can be attributed to the increasing global population.

In 2021, it was estimated that over 1.055 million metric tons of MEK were consumed worldwide by different industries with over 70% of that consumption coming from Asia. This is not a surprise as Asia is the biggest manufacturer of consumer goods.

It is estimated that between the years 2021-2026, MEK is projected to grow at an annual growth rate of 2.3%. The MEK market is shared by three majority industries ranked from highest to lowest share.

MEK’s economic status continues to travel in a positive direction as the increase in demand each year is being met. However, some scientists have expressed concerns with the high consumption of MEK. More so, the scientists are worried that the supply will eventually be scarce.

It is important as a society that our technology and knowledge continue to develop as using effective solvent recovery technology for MEK could be extremely beneficial for our economy.

Interested in learning more about MEK, or want to learn how to recycle it efficiently? Get in touch with the Maratek team of solvent recycling and recovery experts today.