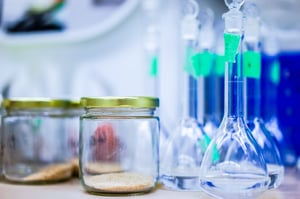 Solvent is broadly defined as a liquid capable of dissolving other another substance, and solvents can obviously be found across a range of industries. In our context, solvents and their industrial uses are either liquids or gases that can dissolve or extract other substances.

Solvents have a range of uses from dissolving paint, oil, and grease, to mixing or thinning pigments, pesticides, glues, epoxy resins and paints, to cleaning automotive parts, tools, and electronics to aiding in the making of other chemicals.

Solvents can be found in multiple industries and are incredibly useful, but a lot of companies don't know how to recycle their solvents to save money and have less impact on the environment. Examples of industries include, but are not limited to:

To determine if two solvents are miscible or immiscible with each other is down to their bonding and arrangement within each chemical. In order to have a successfully dissolved solvent, one chemical must form a chemical bond with another, this can only occur with like polarities.

On the other hand, if the two solvents are not alike, a solution will have visible layers when mixed, the most famous example being a mixture of water and oil, the layers order themselves in regards to their respective density. In our example, the oil is less dense than the water, so will appear on top of it, the chemical with a higher density (water in this case) will always be on the bottom.

The cost of solvents have a massive range, from anywhere as low as $50 going up to over $2,000 per 55 gallon drum. This can easily add up to large figures, even for small volume companies. Solvents are normally purchased and delivered to various businesses and industries for their use, but what do companies do with their waste solvent?

At Maratek, we are market leaders in waste and solvent recycling and have been for the last 20 years. We take pride in providing our customers throughout North America with reliable, innovative, and cost saving recycling solutions. Our solutions allow companies to maximize their profits and reduce solvent costs.

Contact us today and we'll help you to establish a safe, reliable, and environmentally friendly solution for solvent or wastewater recovery and recycling.