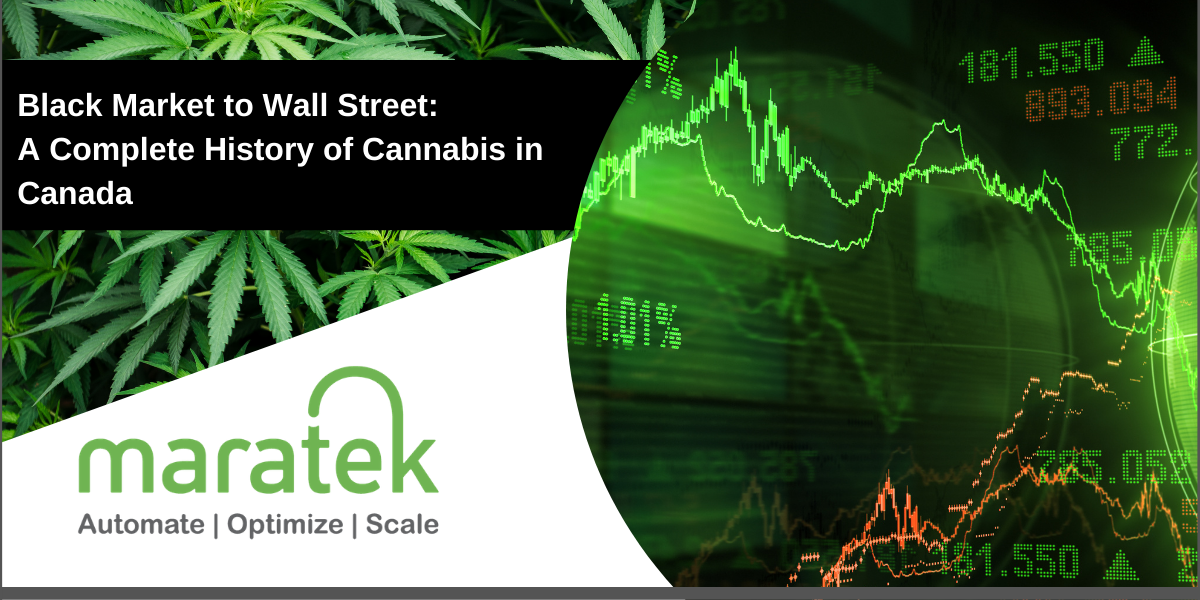 Cannabis production and profits have been through ups and downs in Canada. Fully criminalized in 1923, cannabis wasn’t popular and neither was its production. The black-market industry didn’t see any increase in popularity until the mid-1960’s, and since then it has grown continuously.

From the 60’s onward, any sort of discussion around the topic of decriminalizing cannabis consumption or production was overlooked and forgotten. It wasn’t until the year 2000 that medicinal use of cannabis had brought up the discussion of decriminalization.

The rise of the black market

The error in the previous century was that prohibiting cannabis was unconstitutional, considering there was no exception for medicinal consumption. Health Canada then responded to this ruling in 2001 by regulating access to cannabis to licensed patients. These patients were either allowed to grow their own, or purchase from a licensed producer.

In the meantime, while politicians, law enforcers and legislatures were debating how to regulate the medicinal and illegal consumption and production of cannabis, the black market industry was booming.

The industry saw a wide range of entrepreneurs competing for market share, selling different quality products and competing for prices. The industry blew up in the early 1970’s and continued to grow thereafter.

Since producing cannabis was illegal, it was much harder to produce forms of cannabis that were different than the raw marijuana flower. The two main products were the raw flower for smoking, and the less popular form of blended THC oil in a pastry or food. Although possible, it was much harder to produce the latter considering these production processes were illegal.

The production of cannabis oils for medicinal purposes

This caused an exponential increase in the cannabis black market, and as Canadian legislatures realized there was a potential 10-billion-dollar industry they were missing out on, they began to formulate a plan to get in on the market.

The decriminalization of cannabis consumption for leisure

In 2017 the Canadian government brought forward an act to decriminalize cannabis consumption for leisure; however, there were still regulations and licenses needed in order to produce cannabis products. These regulations were put in place to maintain a certain level of safety over the consumption of impairing products, much like alcohol.

The current status in Canada requires producers to have a federal license to cultivate, process and sell cannabis. The types of licenses and restrictions can be found on the Government of Canada website. The system of federal licensing cannabis growers and THC producers has made it harder for entrepreneurs who have been in the black-market already.

Some of them are without the capital or funding required to ensure their processes get approved by Health Canada.

How do companies get started in cannabis production?

The result of legalizing cannabis in Canada was actually an increase in black-market activity. Much of this activity stems from the difficulty of getting qualified to produce. Many black-market entrepreneurs could feel that it’s a waste of time and money to legalize their processes if they were satisfied with the scale of their business before.

Producers that are to scale and wish to hold a good amount of market share within the up-and-coming legal cannabis industry need the appropriate processes to match.

The guidelines that Health Canada uses to regulate cannabis production are under GMP and EUGMP for medicinal cannabis production. To establish GMP or EUGMP equipment or processes internally can be quite expensive for a company just starting out, and thus may need to already be in a similar industry to be worth the investment.

How can Maratek help?

For a company like Maratek, we have been in the solvent and extraction industry for more than 60 years and have an opportunity to grow into this new industry.

We provide equipment already GMP and EUGMP certified. For a company that doesn’t have the engineering team or the funding to make their processing equipment in-house, then it's wise to use third-party equipment dealers like Maratek.

GMP casts a very large shadow over the production of cannabis and so, for those who seek to enter the industry without establishing themselves previously may have a difficult time investing in the pre-production guidelines. For companies already established in similar and familiar industries like Maratek, the cannabis industry can be both engaging and profitable.

The United States is host to the largest cannabis and hemp production market on the planet.  The industry in the states has grown to include safety regulations for extracting cannabis and hemp in the form of C1D1 safety guidelines.

C1D1 stands for Class 1 - Division 1.  Class 1 includes building codes that host production that involves flammable gases or potentially explosive gas. One of the most popular and successful extraction methods for cannabis and hemp uses ethanol, which falls under class 1 regulations.

Division 2 assumes that the area will unlikely host flammable gases or vapors due to their existence in a closed system; however, in manufacturing procedures there are always possibilities of a leak in a closed system - a mistake made by an employee, or faulty equipment.

In the case of an accident, the room most likely will host similar guidelines that follow the C1D1 guidelines with minor tweaks.

There are many systems that are sold for cannabis and hemp extraction that fall under division 1 and division 2 definitions.

Cannabis and hemp are officially under C1D1 and C1D2 safety regulations due to the many systems that host ethanol, hydrocarbon and butane extraction. These safety guidelines are to be considered when constructing an extraction facility of any kind involving cannabis and hemp extraction.

If a company has a facility suited to C1D1 regulations already and is in a similar industry, it may be in their best interest to take on cannabis and hemp extraction. C1D1 safety regulations vary per municipality but the majority consist of the same regulations. They have been adapted globally and are a major requirement during cannabis and hemp production.

With so many safety regulations and manufacturing practices to consider, trying to start up a cannabis and hemp extraction facility can seem expensive, time consuming and not worth the effort to ensure everything is up to par.

This is where Maratek comes in. Maratek is an engineering consulting and equipment manufacturing company for cannabis and hemp extraction and has been in the industry for over 50 years. They are already up to speed with the GMP, EUGMP and C1D1 guidelines so all their equipment is regulated and ready to be installed. The only requirement on the customer side is that their extraction room be constructed to suit C1D1 guidelines as well.

As a company who originally made it in solvent recovery and hazardous waste recycling, Maratek has positioned themselves into a growing 10-billion-dollar industry as market leaders since the legality of Cannabis products in 2017.

When working with an end-to-end company such as Maratek, you get a closed loop system that starts with the extraction process, followed by recovery, winterization straight through to distillation, and then putting it through the filter process again should your product require it. You can establish your processes like a well-oiled machine.

Want to learn more about how Maratek helps up-scale your operation? Contact our representatives for more information!